Researching State Regulations: Who Can Perform Ablative vs. Non-Ablative Treatments? 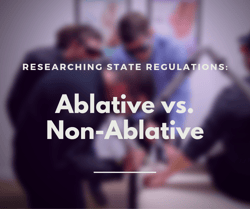 What's the difference between an "ablative" and "non-ablative" treatments? Why does it affect your state's laser regulations?

We'll answer these questions and more in this blog post tackling the how ablative and non-ablative laser treatments can be regulated differently.  First, it's important to understand the difference between these these two types of treatments.

Ablative Lasers
An ablative laser is one that is designed to vaporize, cut, or otherwise modify skin tissue. These procedures may draw blood, and are largely referred to as ones that will remove tissue at the epidermal or dermal level. A classic example of an ablative laser treatment is one for resurfacing, typically a Carbon Dioxide or Er:YAG laser gain medium.

In general, ablative lasers are more strictly regulated.  It's typically required that a medical professional fires the laser and delegates treatments to other practitioners onsite.  Some states, however, don’t differentiate between the various types of Class 4 laser devices, whether they’re ablative or non-ablative. Thus, the procedures will occasionally face the same level of regulation.

Non-Ablative Lasers
Non-ablative lasers benefit from the luxury of potentially having fewer side effects and less risk - not to say these devices aren’t dangerous! Most states require that laser users have documentation stating they have completed a training course covering critical points of safety, physics, complications/contraindications, and establishing good patient care protocols.  Additionally, the role of a medical director will be defined.

Play it Safe - Training is Important!
Even if the treatment you’re hoping to perform is “non-ablative”, keep in mind that these devices aren’t foolproof.  Without proper training, it can be easy to use the devices incorrectly and unknowingly perform an ablative treatment. These are obvious issues for you as a practitioner, as well as your patient. That’s why it’s important to learn through an appropriate training course and understand the protocols that are provided to you by your laser manufacturer.